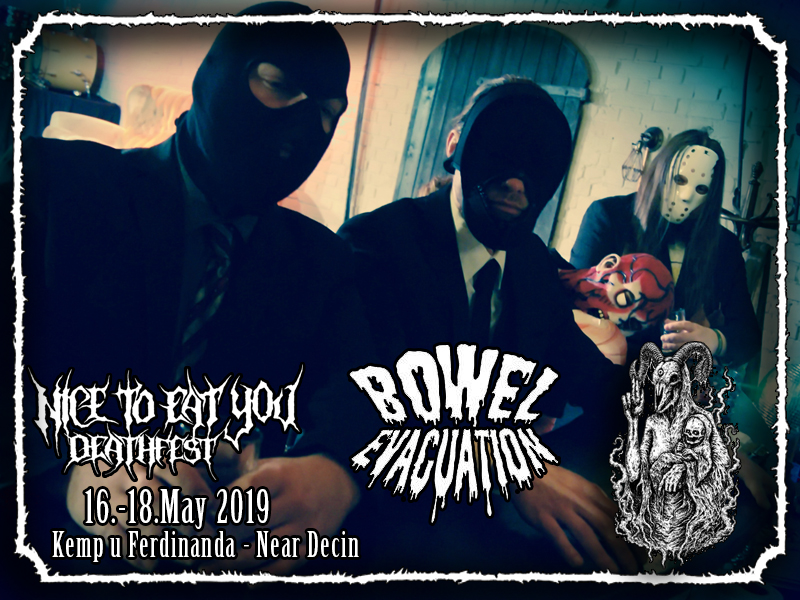 In 2011, Dr. Ufta (drums) and Mr. EEEEjakulator (bass) decided to make blunt Goregrind in Cottbus. Quickly instruments were put together, neither of which had a clue and the idea was put into action. Then they picked up King Groove (guitar) from an even more shitty neighbouring small town, from the train station and the first demo “Down the panties … Out the dirt” was hammered in and “Bowel Evacuation” was shit into the world. After half a year one went on the search for a screamer and found Dipl. Kotgurgler. First live experiences were gained and in 2013 xBxEx was part of a 4way split. In between, of course, the rinsing was always pulled on the stages and some clubs were made to dance. 2015 followed the first full-shit album “Fecal Fetishist”, the name says it all. After positive feedback from different people, who would also lick public toilets after a beer shit, it was clear that one must continue this tasteless way. In spring 2016 King Groove went to the cigarette machine and never returned to the rehearsal room. Since further concerts were already fixed, Dr. Ufta, Mr. EEEjakulator and Dipl. Kotgurgler washed the sadness about it quickly with some standing toilet water from the face and began to convert the songs on drum and bass. The result was Live was close to the brown tone and provided at any time for exuberant dance mood and the one or other Diarrhoae party in the audience. New songs were also recorded for the “6x Kotstulle zum Mitnehmen”-6way split, but something was missing. Exactly another bass. So with General SchBassist (bass) in spring 2017 the band became a Drum’n’Bass bowel torpedo without mercy. They still play groovy blunt fetish open faecal porn grind. From the most smelling septic tank of Germany into the wide world: ea(s)t kot for live.