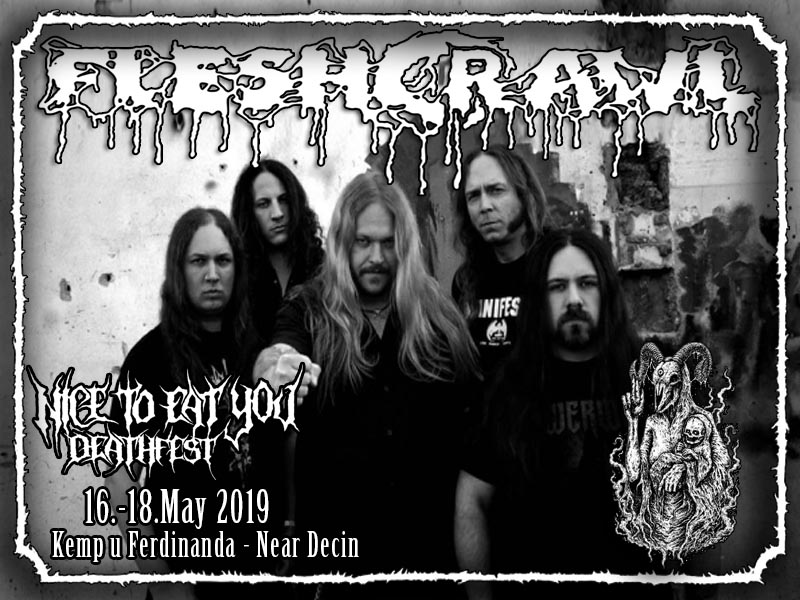 FLESHCRAWL came to life in spring 1987 by Stefan Hanus and Bastian Herzog. The band worked
under the name Morgöth until the year 1990, when they changed their monicker to Suffocation and
decided to become much more extreme concerning the musical direction. After their first demo tape
“Festering Flesh” they were again forced to change their band name because of the upcoming US
Suffocation and their first vinyl appearance. After having found a constant band name in
FLESHCRAWL they released their first 7″ EP “Lost in a Grave” in 1991 on Morbid Records. One year
later FLESHCRAWL inked a record contract with Black Mark Production. In June 1992 they recorded
their debut album “Descend into the Absurd” at Montezuma Studio, Stockholm. Shortly after, Mike
Hanus replaced Gero Schmitt on guitar. In 1993 Fleshcrawl’s second album “Impurity” was produced
in Dan Swanö’s Unisound Studio. FLESHCRAWL received great reviews from the international press
for their brutal and uncompromising Death Metal sound, not to mention their highly powered live
shows. They proved their power at the Easter Bash Tour ’95 where they were joined by Deicide,
Cathedral and Brutal Truth as well as Sinister and Kataklysm.

In December ’95 FLESHCRAWL recorded their third album “Bloodsoul” being followed by their fourth
album “Bloodred Massacre” in 1997 – both recorded at Abyss Studios by Peter Tägtgren. Having been
the debut for the new singer Sven Gross who took over the place of Alex Pretzer, “Bloodred
Massacre” earned the best reviews since their first album in 1992.
In 1998 Tobias Schick occupied the long time vacant bassist slot. After the release of “Bloodred
Massacre”, FLESHCRAWL cut the ties with Black Mark and went on a four week European Tour with
Vader and Kataklysm, also participating in festivals with Cannibal Corpse and Dark Funeral. Back
from the tour, FLESHCRAWL signed a contract with Metal Blade Records. In January 2000 “As Blood
Rains from the Sky – We Walk The Path Of Endless Fire” – produced at Fredman Studios in
Gothenburg – was released. A top class production with killer riffs and vocals that penetrate to the
bone made “As Blood Rains from the Sky – We Walk The Path Of Endless Fire” an absolute must
have item for all Death Metal Fans. Press reactions and reviews for this album turned out to be the
best since the band came together in 1987.

In June 2000 FLESHCRAWL went out to tour Europe together with Vader and Vital Remains for a 25
show trek. Several single shows and festivals followed throughout the summer (e.g. Czech Dynamo
Festival, Summer Breeze Festival). In the meantime, FLESHCRAWL started preparing their new song
material for their 2nd album on Metal Blade. In January 2001 they supported Bolt Thrower on a warmup

tour of Germany and Holland followed by the Torture-Tour in June 2001 supporting Six Feet Under.
That same year FLESHCRAWL performed live on the Party-San Open Air. In September 2001 the
band entered Studio Underground in Västeras, Sweden, to produce album No. 6 – “Soulskinner”. After
having returned from the studio with the best feeling ever, the band went out to promote “Soulskinner”
supporting Bolt Thrower and Benediction on a 4 week European Tour in January 2002.
Having played a few single shows in Germany and Europe throughout spring and early summer 2002,
FLESHCRAWL performed on Wacken 2002, which turned out to be a really successful experience.
This also was the first appearance of new guitarist Oliver Grbavac substituting founding member
Stefan Hanus, who quit the band for personal and private reasons. In fall 2002 the band appeared on
the Westfalenfestival in Dortmund amongst other things. Another premiere took place in November
2002: FLESHCRAWL played their first tour of Japan supporting Hypocrisy from Sweden. This was a
very intense and huge experience in the band’s career. In retrospect, the year 2002 became the most
successful since the band’s foundation.

After having returned from Japan, FLESHCRAWL started writing for the next album. During the year
2003 the band made itself scarce concerning live shows in order to intensely prepare the new song
material for the follow-up to “Soulskinner”. In November 2003, FLESHCRAWL again headed up to
Studio Underground in Sweden to record album No. 7, entitled “MADE OF FLESH”, which musically
kicks off where “Soulskinner” ended. “MADE OF FLESH” features 10 songs of extreme variety and
deadliness – having something in store for every die-hard death metal fan !
FLESHCRAWL supported “Made Of Flesh” by touring with Six Feet Under in February/March of 2004
on a very successful European tour. During the summer of the same year the band played various
single shows as well as a bunch of open air festivals (Party.San, Summer Breeze, Metalcamp, Rock
Harz, Skeleton Bash, Kaltenbach).

In early 2005 the longtime bass player Tobias Schick left the band for personal reasons. The band
continued without a bass player while they were searching for a new fourstringer at the same time.
The search took longer than expected and just in early 2007 they found with Nico Scheffler the right
guy for the position. Nevertheless the band played various single shows and festivals (Up From The
Ground, Walpurgis Metal Days) in the year of 2006.
In early 2006 FLESHCRAWL begun writing new songs for the successor of “Made Of Flesh”. But fate
struck the band as several band members had to face serious private problems during 2006 and the
songwriting process was hold on ice for a while. The band took off where they left in the second half of
2006 to continue writing songs for the eighth album “STRUCTURES OF DEATH”. Since Tobias was
not in the band anymore, the guitar team Mike Hanus and Oliver Grbavac stepped in and delivered a
great portion of the song material for this album. For the first time in the bands history FLESHCRAWL
didn´t record in Sweden, but in the Studio Toninfusion in their home city Ulm/Germany with Martin
Schmitt behind the desk. The clear and heavy rough mixes proved their decision to be right! Pelle
Saether at Studio Underground in Västeras, Sweden mixed and mastered the album once again and
delivered the perfect job!
Between 2008 and 2015 the band did not release new music, however was always active playing live.
Over the years FLESHCRAWL played several well known fests like SWR Barroselas (2008), Protzen
Openair (2008, 2016), Queens of Metal (2008), Rock Maraton (2008), Summer Breeze (2000, 2004,
2008), Battlefield Metalfest (2009), Chronical Moshers (2010), Way of Darkness (2007, 2011), Fistful
of Metalfest (2012), Stromgitarrenfest III (2012), Inferno Metalfest (2013), RockHard Festival (2013),
Bang Your Head Openair (2013), Baden in Blut (2014), Faces of Death in Moscow (2014), Nepal
Deathfest (2016), Paelzer Hell (2016), Holsteiner Deathfest (2016), Death Shall Rise (2016),
Schoonebeek Deathfest (2017), Obscene Extreme (2018), Helsinki Deathfest (2018) as well as many
single club shows.

In the year 2011 Nico Scheffler on bass quit and was replaced by Manuel Markowski.
In 2015 FLESHCRAWL teamed up with Skinned Alive to produce a split CD with 4 new songs which
was released by Brutal Arts Records and in the following year of 2016 released again by FDA
Records.

In early 2016 FLESHCRAWL embarked to their first ever Asian tour. 8 shows across countries like
United Arab Emirates, Nepal, Thailand, Taiwan, Philippines, Singapore and Vietnam. It turned out to
be a fantastic experience and great success !
FLESHCRAWL is planning the long awaited follow-up album to “Structures of Death” for the end of
2019.