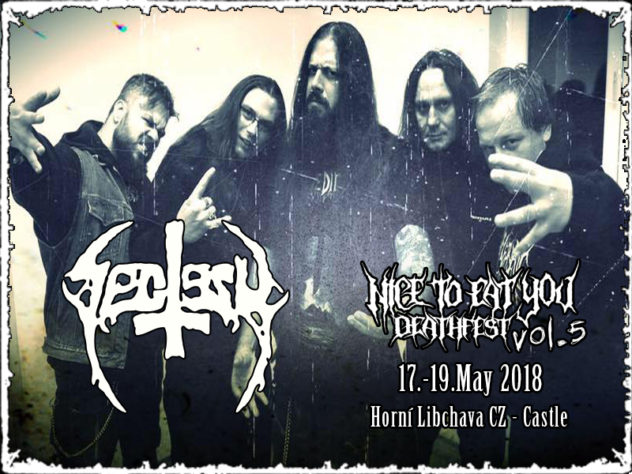 Pathologically lazy and stubborn reactionary barrage of disgusting music. This band gurgles by synonyms of graceful rotting past, which is combined with corrosive greed “to be mothballed” in what is unconcealed despised. In another words, old school death metal from Kolín for all the old school people everywhere.

The band was founded in 2011, when Dejvy Krédl (ex-Despise) made a decission, he’ll build and old school death metal formation. In 2011 was released the first promo CD and thanks to its very success and interest on the band recorded debut album „The Shreds of Oblivion“, which was released in early 2014 by „Nice To Eat You records“ and „Sevared records“ for USA. The selling of this album and the feedback from fans have confirmed quality of this album.The band recorded for each song of „The Shreds of Oblivion“, as a snapshoot of „zombie life“.

You can see all the videos here: https://www.youtube.com/user/Dejvy666.

In early spring of 2015 Sectesy released a Promo CD named Possessed by Passion as an introduction for the new album “In The Secretion of Upcoming Days” which has been released by „Metal Age“ (https://www.metalage.sk) in 2017.

Now, the band more focused on live shows with the new stuff and also starting to prepare new material to be released in early 2019.