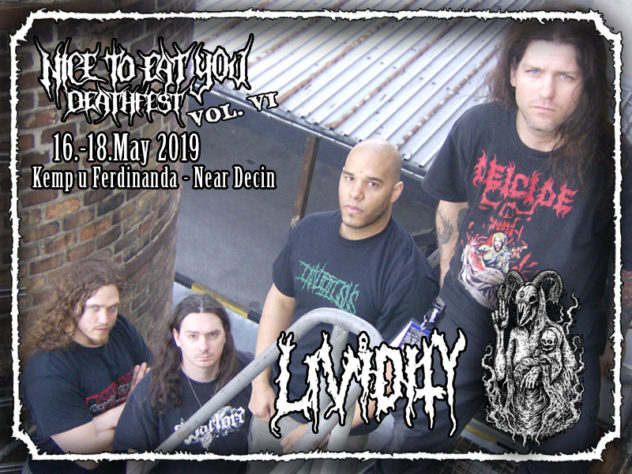 US porn grinders hailing from Illinois, Lividity and their releases speak volumes of heretic, hatred and whores!! Founded by Dave Kibler in 1993 as an enthusiastic one-man project, the extremely brutal sound of the early days fused massive influences from Hypocrisy, Bloodfeast, Cannibal Corpse and Obituary into an acidic and breath taking musical mixture. The goal was “the faster the music, the tighter the execution” & “the slower the music, the heavier the tone”… After the first spreading of his music with it’s inhumane lyrical articulations, Dave was joined by some like-minded comrades. Years went by and brought several more Lividity releases. Lividity’s debut was a simple and crushing 4 song tape EP titled “Rejoice In Morbidity” 1996 (only released in Europe through Poland’s Immortal Records) which was heavily tape traded and circulated, then the debut CD through Ablated Records (Usa), “Fetish For The Sick” 1997, featured such anthems as Rectal Wench, Lacerations Of An Unclean Twat, and Pussy Lover. This one jammed a stiff rod in the ass of the underground!! There is simply no mistaking what to expect from these guys. Other releases to follow, that have helped perpetuate cult like status in the death metal underground revolution are “Show Us Your Tits (Live)” 1999, “The Age Of Clitoral Decay” 2000, Lividity/Profanity (Ger) split 7” 2000, “…Til Only The Sick Remain” 2002… amongst other split vinyl, bootlegs, rehearsal demos and mass promotion!!

Time for a new era in brutal bliss!! The acquiring of Von Young on vocals / guitar and Jordan Varela on drums in 2005. Then all Hell broke loose!!
The release of the highly acclaimed masterpiece, “Used, Abused And Left For Dead” was unleashed in the Spring of 2006. A vicious powerhouse of debauchery. Leaving every victim, a pile of carnage, on the ground where they stood. Lividity has acquired Garrett Scanlan on drums and the live performance has polished up as well with sheer energy and bone breaking speeds, yet still capturing the old school essence that has been demonstrated through the years. With the signing to War Anthem Records (Germany) in cooperation with Epitomite Productions (Usa), Lividity is on a world domination campaign. Then the final piece to this monstrosity was bassist Jake Lahniers to the bass and backing vocals end of 2008. Lividity was hitting their peak now. With Jake we have triple vocal threat, insane writing capability, and an equally insane stage animal.. Various festivals and tours including 9 Europe invasions include– tours ’99 (Fleshless/Sanatorium), ’03 (Master/Damnable/Mastic Scum). ’07 (Master/Imperious Rex), ‘09 (Requiem/Warpath/Nordor) and festivals ’05 Fuck The Commerce (Ger), ’08 Party.San Open Air (Ger), ’09 Obscene Extreme (Cz) & Kaltenbach (A), ’10 Party.San Open Air (Ger) & Mountains Of Death (Swiss) & Barther Open Air (Ger). [Other notable tours and fests– ’04 single show in Lyss, Switzerland, ’06 USA tour w/ locals, ’09 Canada tour (Blastomycosis/Mortify), ’09 Bogota Death Grind Fest (Col.) as well as earlier years of Central IL. Metal Fests, Milwaukee Metal Fests, Ohio Death Fests, Texas Death Fest, Mayhem Peoria Fests… and more]

2009- brought the release titled “To Desecrate & Defile”, expect nothing less than energy and power of “Used, Abused…” coupled with the old school death / grind that has helped shape what Lividity has become!!