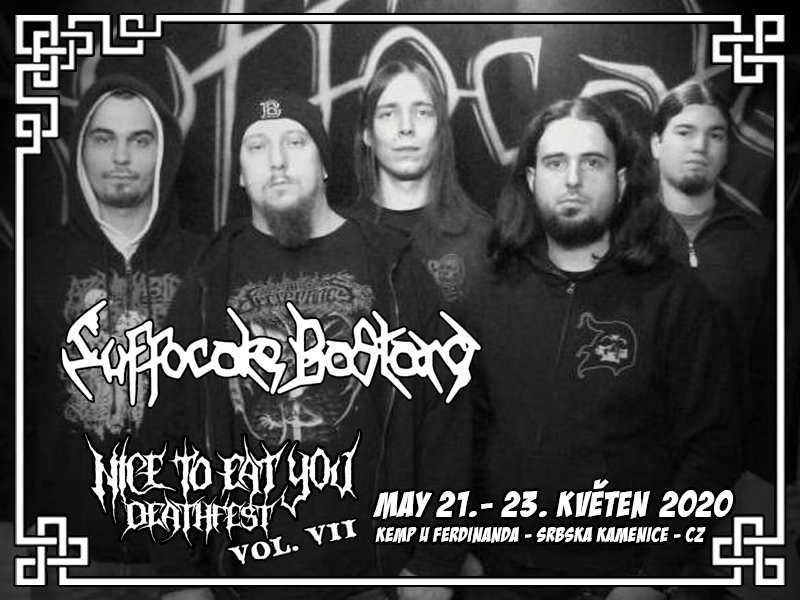 Since their founding in the year 2000 SUFFOCATE BASTARD strongly
enrich the German and global underground with their unique style.

Although set back by line-up changes numerous times, the band could
not be hindered to present to the world their vision of Brutal Death
Metal on stages throughout Europe and on record whenever possible.
On multiple occasions the band could prove with their devastating live
performances in Germany and Europe, among others the renowned
Mountains of Death (CH), Death Feast Open Air (DE), Neurotic
Deathfest (NL) und Brutal Assault (CZ) festivals, that they are a force
to be reckoned with.

With their debut album „Acts Of Contemporary Violence“, recorded at
Soundlogde Studios with Joerg Uken and released in 2007 on Revenge Productions, the band could leave their mark in the global
underground and thus received quite some positive criticism.

Uncompromising in speed and brutality an aggressive spectacle is
showcased, hardly equalled inside the German scene yet. Based on
the mercilessly attacking rhythm section formed by Karsten Boehnke
on Bass and Tim Schlichting on Drums, Guitarists Othon Kokkinos and
David Adamietz burn off a firework of riffs, in which only the complex
breaks deliver some desperately needed air to breathe. Topped off
by the inhumanely bestial vocals of Brice Blanchard, the listener
speedily realizes that SUFFOCATE BASTARD do not offer the chill-
out-sound for relaxation. Easy Listening is not an option as the
pressure is put on steadily from beginning to the bitter end. The
obvious aspiration is to create a relentless flow of unceasing brutality
which sucks the listener in just to spit him out traumatized and
musically raped.

Neither the wheel is re-invented, nor the musical quality narcissistically showcased. The band concentrates on what they consider the essential in Brutal Death Metal, and that means to permanently batter, bruise and crush.